Tips & Tricks : Zimbra Notifier the desktop client which can be integrated with your Webmail 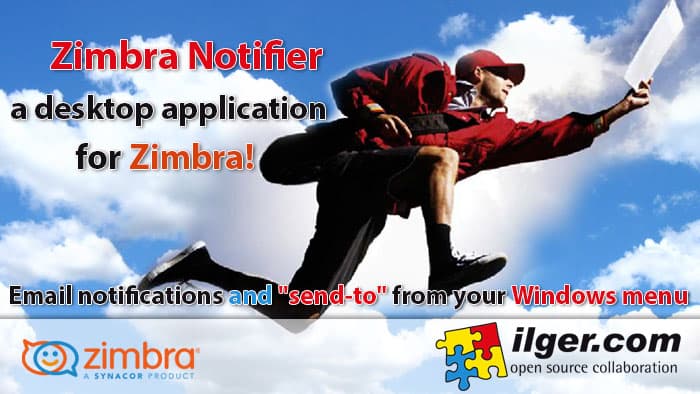 Zimbra Nofier: the desktop client which can be integrated with your Webmail

What is Zimbra Notifier? We like to define it as a small desktop client for Zimbra. Developed for a Windows environment, Zimbra Notifier was designed for all those users who use Webmail but do not want to give up the MAPI functions. This makes it possible to attach files directly from a Windows pop-up menu or directly from applications such as Adobe Acrobat Reader or Microsoft Word. In addition to its ability to send e-mails, Zimbra Notifier can notify you about all the e-mails you receive, whether they are in the Inbox of your Zimbra account, in folders which have filters on them or in shared folders.

When you receive a new e-mail message, Zimbra Notifier will display a pop-up message, giving details of the sender and the subject and a small preview of the e-mail message.

Based on the Zimbra system, Zimbra Notifier is also able to identify the destination folder of the e-mail message, showing a colour code for it in the top bar of the message. If you click on the pop-up notification, the message will be opened directly in your Webmail, just as if you had double clicked on the message in your Web client. This is thanks to a Zimlet, which completes and supplements our product.

And if we wanted to send an e-mail message? Nothing could be easier with Zimbra Notifier. In addition to the “Send to” function referred to above, with Zimbra Notifier you can send e-mails directly from the Tray System of Windows, by clicking on the item “Send an e-mail”. This will open a new message composition window which is very similar to the window in the Webmail of Zimbra.

People, accounts, contacts, signatures and font settings can be synchronised automatically from your Zimbra account, so that the end user only needs to write the message! By selecting the Zimbra templates folder, you can even use the same models specified in the Webmail. And finally, by activating the very convenient “UndoSend” function selected from the options, you will have several seconds to confirm the sending of the e-mails before you send them.

Zimbra Notifier: the MAPI client which completes your Zimbra Webmail!

the MAPI client which completes your Zimbra Webmail

Zimbra Notifier is a small e-mail client for Zimbra. Developed for a Windows environment, it integrates perfectly with your Zimbra account, finally giving you the ability to attach files directly from Acrobat Reader or Microsoft (MS) Word!

With Zimbra Notifier, you can easily attach your files directly from a Windows pop-up menu. Contacts, signatures and font settings will be integrated automatically from your account, without you having to re-enter any parameter settings. Installation? It’s simple and immediate!

With Zimbra Notifier, in addition to sending e-mails, you’ll have a practical system of e-mail notifications and appointment reminders. Thanks to a Zimlet, by clicking on the pop-up notification, you can open a message directly on your Zimbra Webmail!

The user interface is quite similar to that of the Zimbra Webmail, in order to reproduce for the user an interface which is entirely familiar: from the component for writing e-mails in HTML, to the practical and useful Zimlet UndoSend and Template functions.